Meet the #1 rated chef on the Aggressor dive boat fleet out of Kona Hawaii! Kevin was born in Greene New York and attended Broome community college in Binghamton New York, back then he was interested in hotel restaurant management and received his degree in the same. An inspiration in Kevin’s decision to start his career as a chef was watching Food Network tv. He has spent 25 years keeping peoples bellies full and practicing restaurant management in numerous locations until he finally decided to call Maui home. He has been working in Alaska for 3 years and finally we were lucky enough to have him land at Bear Trail! He enjoys keeping guests at Bear Trail Lodge happy, healthy, and well fed during the summer. Kevin's favorite parts about this state is catching King Salmon and his job is complete when he sees the smile on clients faces at the end of a day after one of his notoriously scrumptious meals. 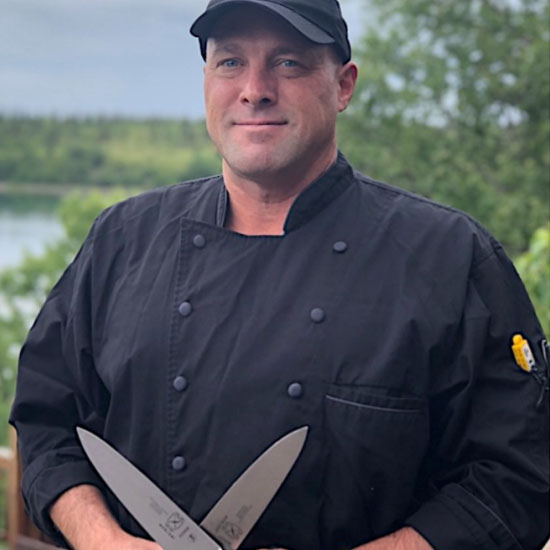 Celia has gone ice trekking to an albino glacier summit in the Southernmost city in the world, received her Divemaster certification at a UNESCO World Heritage Site known for some of the strongest and deadliest currents, and sailed on a 10-day voyage across the South Pacific. When she’s not out adventuring in the world, much of her passion revolves around deepening her practice in yoga, and learning more about food and wine gaining inspiration from her travels. Her roots in food culture started at a young age with her parents owning a small restaurant and catering business. Since then she’s also worked in fine dining, assisted Chef Kevin on a luxury liveaboard yacht, worked the kitchen at a yoga retreat community center, and with menu design alongside caterers, food vendors, and restaurants as an event planner. Originally from Southern California, she now considers her home to be on the Big Island in Hawaii. This is her first season in Alaska! 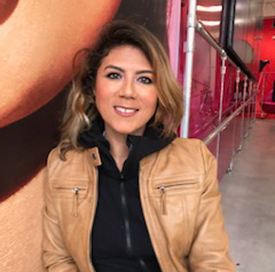 Caleb was born in Chicago and he and his beautiful wife Amber both teach in the Bristol Bay region his subjects are English and history and he is working on his masters in Liberal Studies. He has always loved to cook as a hobby and he decided to turn it into a profession, helping out other Bristol Bay Lodges and restaurants in past years and we are thrilled to have him with us at Bear Trail Lodge this year. The sustainability of Bristol Bay has become something he admires greatly and when he is not back in the kitchen preparing some outstanding culinary delights you might find him out on King Salmon creek fishing or standing over his personal grill with a fine wine entertaining friends. 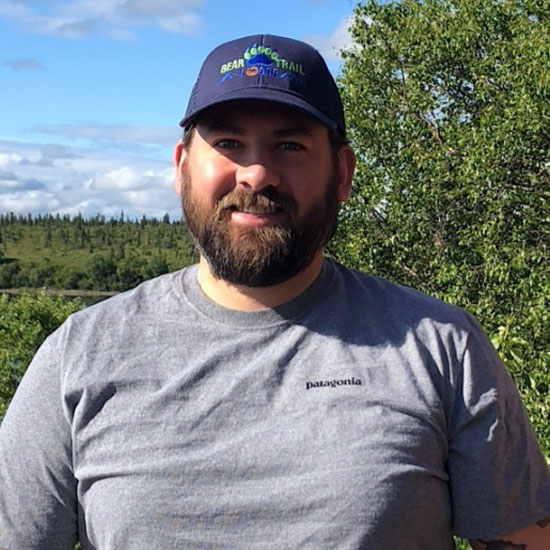 Dana lives in Forks, Washington where she has owned a barbershop for 12 years and is known as the “Queen of the Clippers”. Prior to working with Bear Trail Lodge she spent time in a remote camp on the Alagnak river. She now oversees all the housekeeping and serving staff for us here at Bear Trail. Some of her other interests include going to the gym, traveling, fishing, hiking, kayaking, and anything else that takes her outdoors. 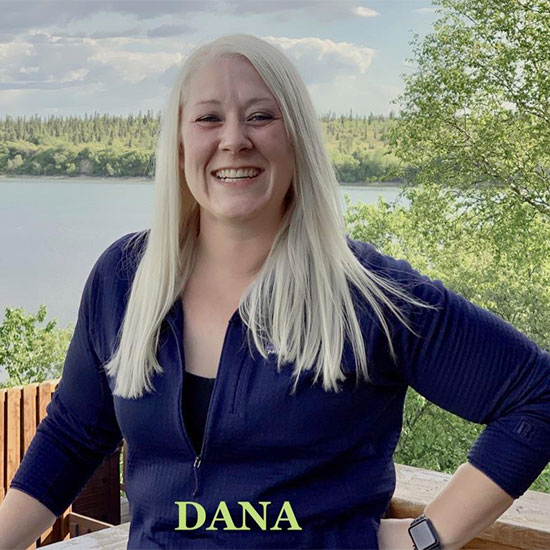 Linda previously lived in Alaska for ten years but now calls Idaho home. She loves Alaska and her time spent here. After she left she just had to return to reconnect with family and friends in Bristol Bay and we are REALLY glad she did! Now she enjoys the best of both worlds, Alaska in the summer and her son, daughter, 4 grandchildren, 2 great grandchildren and the cutest little teacup poodle you ever did see, Gingersnap, in the winter. She also enjoys working on her photography skills, walking, and of course fishing. 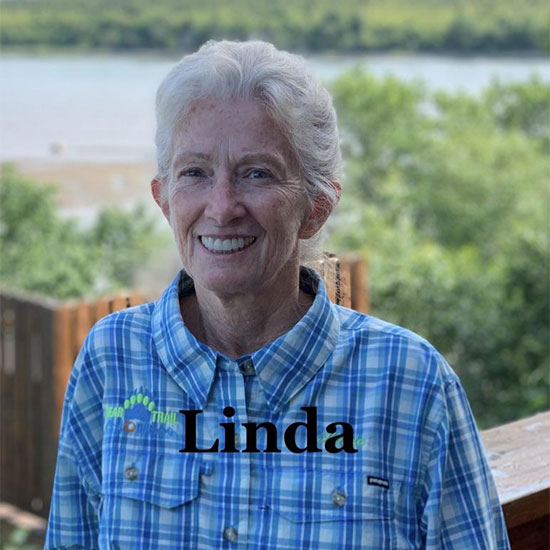 Aurora was born and raised in King Salmon, Alaska with her parents and two sisters. This is her first year with us at Bear Trail Lodge. Both of her sisters have been part of the Bear Trail team in prior years and she spent several years participating in the swim team Nanci coached. She enjoys four wheeling like any Alaskan, and playing volleyball and hanging out with her friends. In the future Aurora wants to attend college and travel to other states with her friends. 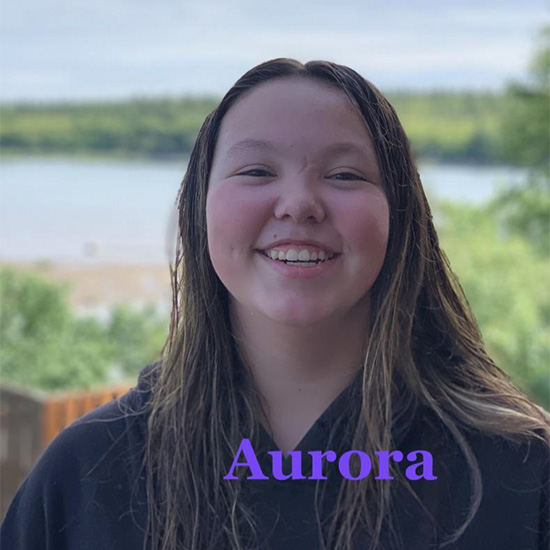 Sarah is from Rose Valley Washington and is joining us for her ninth year as a Bear Trail team member. She is affectionately called another daughter of Nancis or a sister of Rylie's because she pretty much grew up at the lodge. Sarah has accomplished lots in her short life like winning the Washington State High School Equestrian award, has studied abroad in Italy for a year, and is now about to enter her 4th year studying law at Gonzaga University in Spokane Washington. She loves Alaska and it keeps her coming back every year. 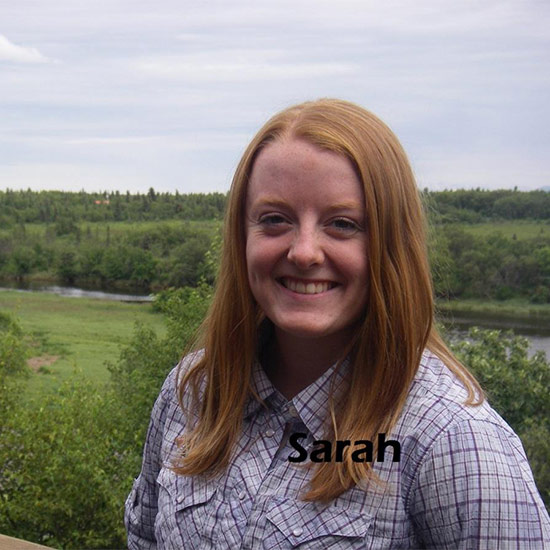 Some might say that she was lucky enough being born in Bristol Bay, but we believe she’s just down right talented. Naiya has lived here her entire life and recently graduated from Bristol Bay Borough School as valedictorian of her class with plans to attend Eastern Washington University this fall to receive her degree in dental hygiene. She played basketball for Heath and took cross country to get better at running from bears (just kidding) and enjoys meeting new people! When she’s not greeting you with a smile, she’s working at one of her other 2 jobs this summer or hanging with friends and we are hoping she hangs with us for a few of her coming years! 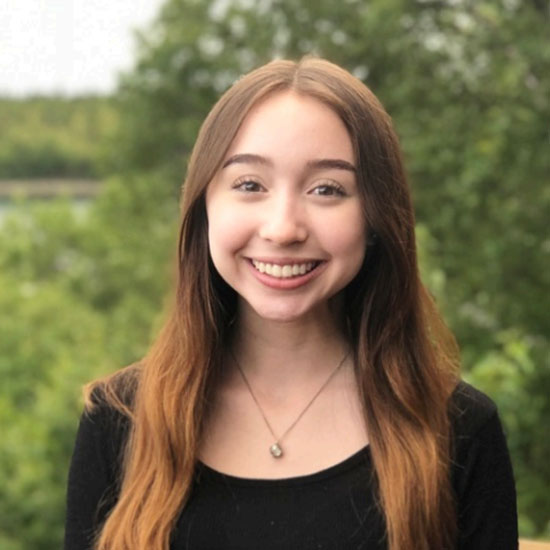 One of our newest additions to the Bear Trail Gang is Michaela Gulotta, she calls Lewiston Idaho home and recently graduated from Lewis and Clark State college with a degree in hospitality management. We’re hoping this will be the first of many seasons for Michaela in helping to keep the lodge and grounds clean and in good order while assisting you inside the lodge with a friendly smile. We thank her boyfriend Logan who brought her up for a visit last season and now we are lucky enough to snag her for a year. She loves the Naknek and is excited to explore more rivers and meet all our wonderful guests. If you have a special adventure from your day on the water please share it with Michaela as she is looking forward to hearing about them as well as experiencing them! 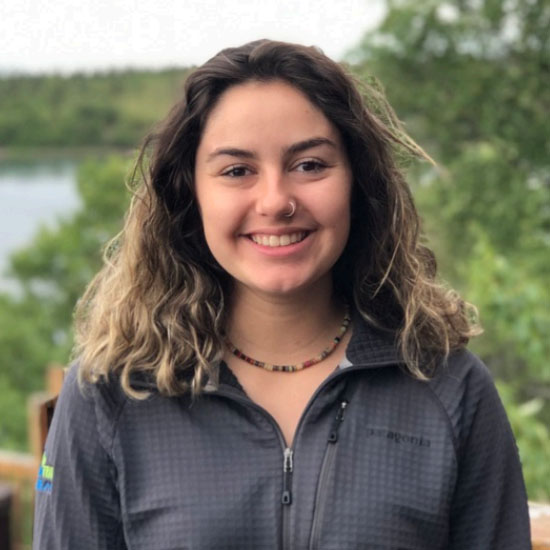 Amber’s hidden super power is as an educator in the Bristol Bay area. She graduated with a bachelors degree in early childhood education and has acquired her masters as a reading specialist. She has been lucky enough to work up and down the Alaska Peninsula through Lake and Peninsula School District, beginning her career in Chignik Bay. She and her husband Caleb spend their summers in the service industry, helping various operations host visitors to our beautiful piece of the world. This year we are lucky enough to have them on our team and when she is not busy making you feel special, you will find her reading in the sunshine or out kayaking on our beautiful waters. 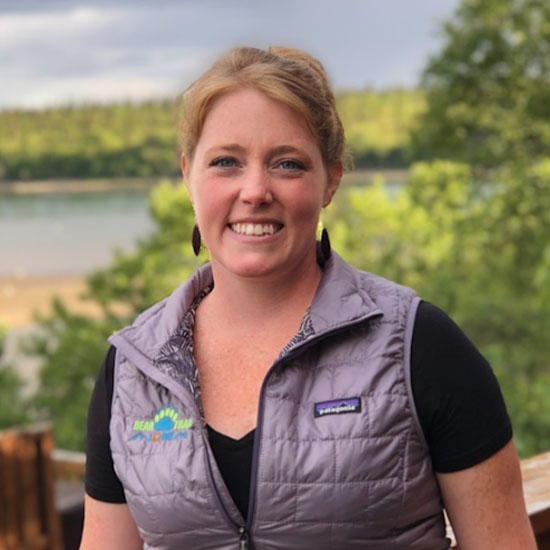 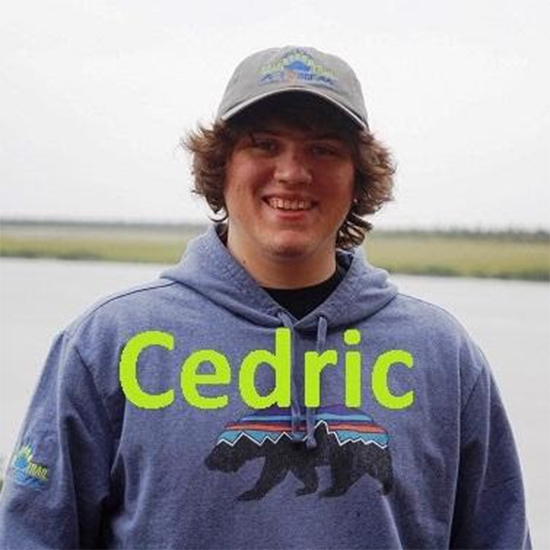 Cord is a resident of Bristol Bay and will be a freshman this fall at Bristol Bay High School. He loves growing up here and truly enjoys the beauty Bristol Bay offers. One of his favorite ways to enjoy the area is to travel up Big Creek in the early morning. The favorite thing he enjoys about being a part of the Bear Trail team is the smiles on everyones faces. He hopes to follow in his moms footsteps and become a pastor in the future, he has already had his first opportunity to actually preach this summer and he LOVED it!!! 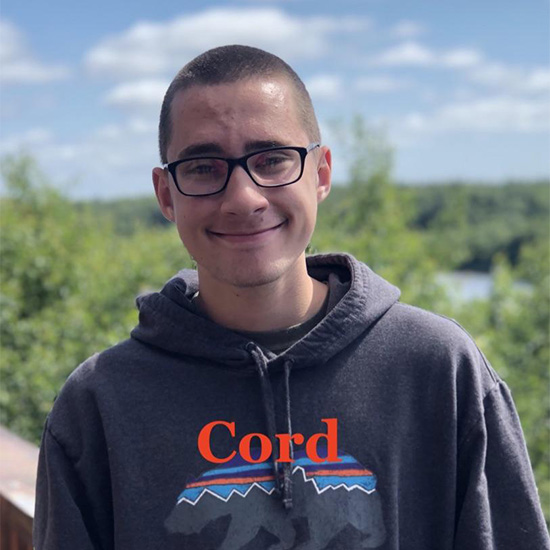 Jay is a mis-placed Kentuckian who has spent most of his life in Alaska. He graduated Bristol Bay High School and during his time in school was hired on a work study program by NEA, the local electric cooperative. After graduating he attended AVTEC a vocational school located in Seward, Alaska to attain multiple degrees in mechanics. He now works full time as a lead mechanic on the night shift for NEA, making sure the lights stay on throughout Bristol Bay. We also are lucky to have him taking care of the fleet of vehicles at Bear Trail Lodge. When he’s not working, Jay likes to weld, hunt, fish and explore on his four wheeler or work on his restoration of a WWII Jeep. 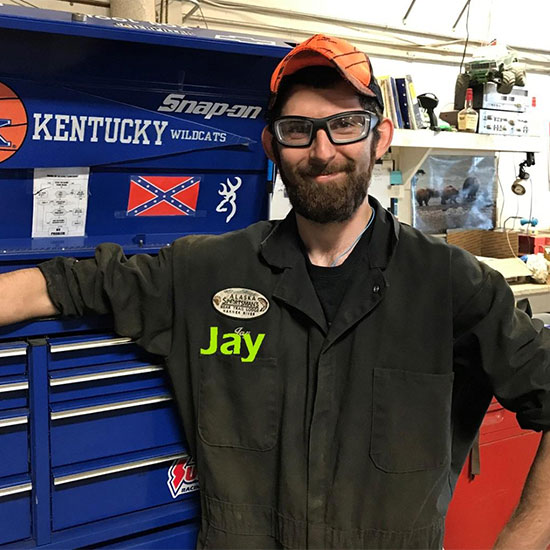 Barry is a born and raised Bristol Bay resident, he just graduated from Bristol Bay Borough School this past fall with honors! He is a new addition to the Bear Trail team that we hope stays on board for a while. You may not see him a lot, he works behind the scenes in the kitchen and we hope to get some additional time out of his busy, duel job schedule and have him work on lodge maintenance as well. He plans on sticking around Bristol Bay for another year or two before he does some exploring of the rest of the world. Barry loves working here because of the great people on the Bear Trail Team and we are glad to have him because he is one of them! 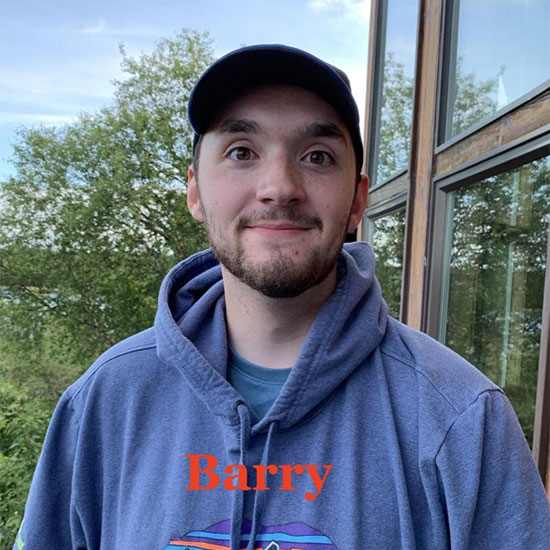 Join Us At Bear Trail Lodge

Request a reservation by calling us at (907) 246-2327 or by filling out the form. We will be in touch to confirm availability and schedule your Alaskan adventure.