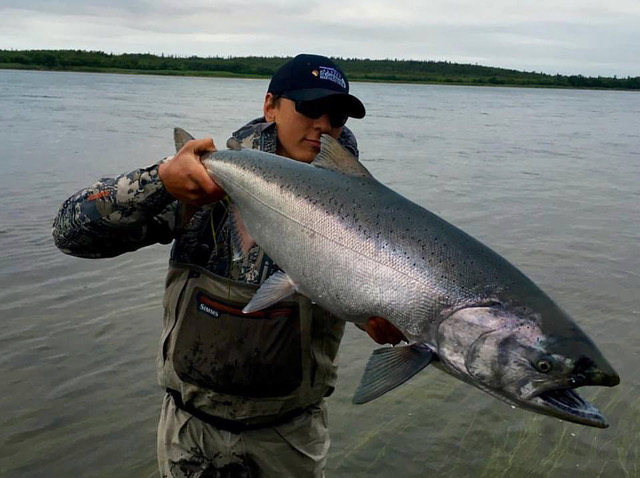 The time of year you visit Bear Trail Lodge impacts the species of fish you will go fishing for. June through September are great times to visit if you’re looking to fish for a variety of salmon species. What makes the Bristol Bay area unique is that it gets all 5 species of salmon: Silver, King, Sockeye, Pink, and Chum. Traveling to the ocean from the freshwater and back, learn the fascinating lifecycle of Alaskan salmon.

The lifecycle of Alaskan salmon begins in freshwater. As a fertilized egg, they are born into the gravel at the bottom of a river or lake. About 10 to 30,000 eggs are laid at once, depending on the species of salmon. It is very difficult for them to survive, and only a handful out of this number do so.

The next stage that salmon approach is the alevin stage. Here, they are small with little tails and a large orange yolk sac on their body. In this stage, they remain in the gravel, protected from predators and feeding off of their yolk sac.

The smolt stage is where the salmon prepare to migrate to the sea. Here, the salmon varies in size depending on its species. Once it grows to a certain size, it begins open ocean migration. In this stage, rainbow trout and other predators actually chase the salmon smolt and feed on them, making the ocean journey long and tumultuous.

As smolts transition from fresh to saltwater, their bodies undergo chemical changes that allow them to survive in their new environment. Adult salmon remain in the ocean for different periods of time depending on their species. Some salmon species only stay in the ocean for two years, while others live in the saltwater for up to 6 years. Before beginning their journey home, they undergo another chemical transformation at the mouth of the river to adjust to the freshwater once again. When they leave the ocean and return to freshwater, they are called spawners.

In the spawning stage, they return to the freshwater that they were born in. According to the Alaska Department of Fish and Game, kings are the first to return, followed by sockeye, pinks, chums, and silvers. Some of them travel 400 to 600 miles to get back to the exact stream where they were born! They can find this place based on their smell. The migration to their spawning ground is even more torturous than their journey to the ocean because they are now swimming upstream against the current. The salmon must dodge hungry bears, skilled fishermen, and bigger fish to survive this up-current trek.

Once they arrive at their spawning ground, the male and female pair up. The female will dig a bed in the gravel where she will lay her eggs. Females can be courted by 5 or more males before she chooses who she wants to fertilize her eggs. They actually grow teeth so that they can protect their eggs from predators. Within two weeks of spawning, both the male and female die.

The impact of the Alaskan salmon on the ecosystem lasts even after their death. After the salmon spawn and die, their flesh becomes a tremendous food source for rainbow trout and arctic char. The abundance of salmon is the reason why the rainbows and char can grow to be from 12 to 30 plus inches long, making the Naknek and Kvichak Rivers two of the best places for rainbow trout and arctic char fishing in the world — right here in Bristol Bay!

The lifecycle of Alaskan salmon is an example of how the ecosystem is impactful to all species. Because the rainbow trout and arctic char in the Bristol Bay area grow large due to the abundance of salmon, it makes it a popular fishing destination.